Beyond the Top 8 – New Decks From Homecoming

Hello everyone and welcome back to another edition of Beyond the Top Eight! My name is Tim, otherwise known as Tchamber5 on ladder. Today we are going to do something a little bit different. Normally, we would go over all of the tournament results and talk about our favorite decks. This week, however, Homecoming dropped on us and there are a bunch of sweet new archetypes that I want to discuss instead. Let’s dive in!

First I wanted to discuss a few cards (good and bad) from the campaign that are interesting and impactful now that we have the full list of cards. 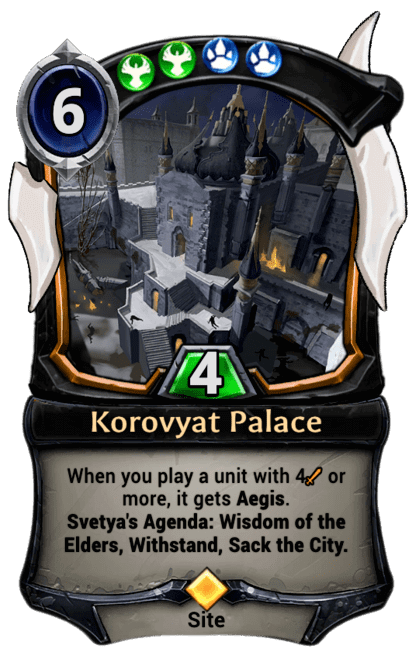 This is probably the most obviously powerful card in the set, likely because it’s busted in half, which isn’t to say that I am not stoked about this card. I mentioned a week or two ago that I love Hooru decks and there are a lot of different ways you can fit this card into various JPx strategies. Top end for an aggressive mid-range deck is what immediately comes to mind here, though Hooru Pledge is certainly a real deck as well.

I think this card is probably pretty underrated and I would not be surprised to see TJS arise in the meta as an aggressive mid range archetype that taxes the opponent’s resources with Teacher of Humility and Andrik. Every faction in this combo has some individually very powerful cards, but whether or not they can come together as a cohesive deck is another question that I’m not sure how to answer.

In all honesty I have no idea how good this card is. I think the first place I am going here is to cheat out Martyr’s Chains with Governor Sahin since Severin gives you a relic you can throw away. 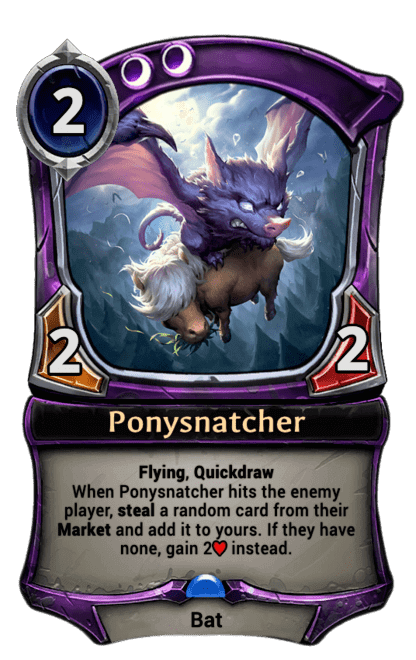 This Card is the real deal, and is a good place to be in this many merchant meta game. It’s a bit slow sometimes, but usually this card will be able to hit twice and be very effective. I mostly like this card in decks that are proactive, where it can be a boon to soak up a torch for your other units even if it doesn’t manage to steal cards from the opponents market. I’ll be testing this card’s limits a lot over the coming weeks. 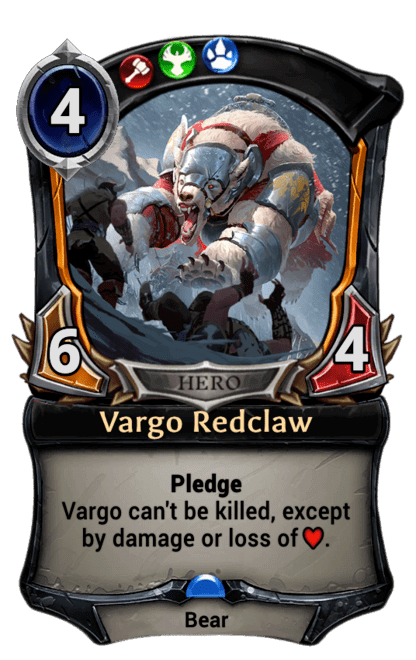 This card is much better than I thought it would be, though it’s not quite as good as the initial hype. Arengee laid down some truth on Twitter the other day, and it adequately describes my feelings on the card:

Basically, Vargo is very good against everything except Runehammer and Display of Instinct, and gets even better when you have four Harsh Rules in your deck. I’ll circle back to this a little later when we discuss the Ixtun Control deck that has been popular over the last few days. Long story short: Vargo is good.

I’m not sure where I want this card, or if it’s really even that good, but I think the place I’m starting here is in FTP Moment of Creation. I have seen some decklists around (we may even talk about one!) that utilize Diogo as a combo piece with Invoke the Waystones, but I honestly have no clue how those decks win consistently when they go off, though the idea is very cool. 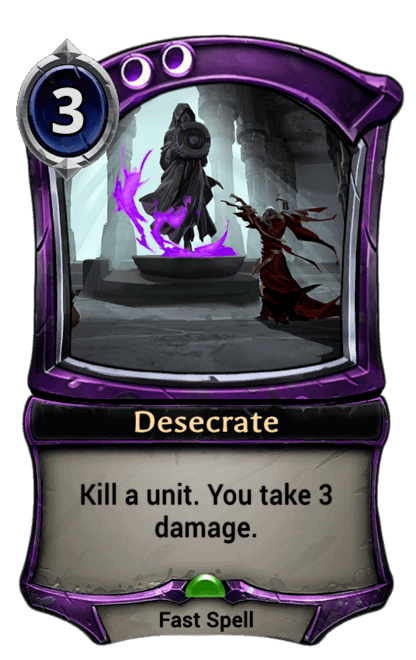 There was some hype when people saw this card, comparing it to Icaria, the Liberator. I think I can safely say that that is not the case. The effect is powerful, but I think the card is just too expensive and takes too much set up to play. That being said, I will probably eat my words and get punked by this card in the next ETS, but if I were a betting man, I wouldn’t be betting the house on this racehorse. 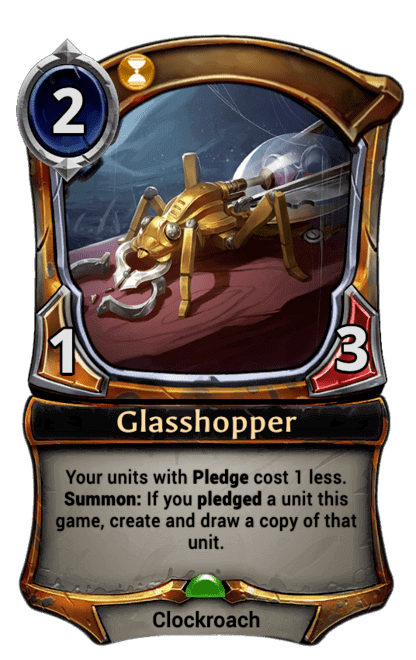 This card is going to be the bread and butter of Pledge strategies, and it enables some really sweet other strategies, which we’ll talk about in a moment. The fact that it reduces the cost of pledge cards by one makes most of them playable on their own. 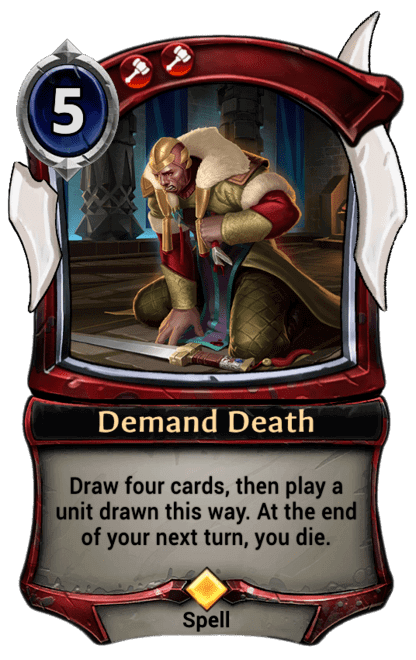 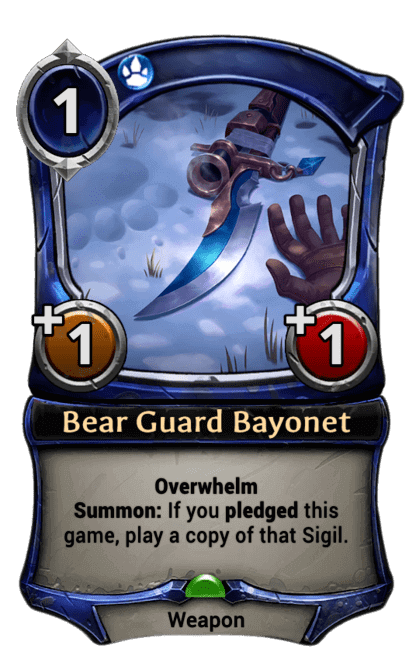 This card is ridiculously powerful, mostly because Hojan is an insane combo with this card. It is also literally free if you pledged, so it becomes pretty easy to utilize synergies that let you take over the game ridiculously fast. If there was a card to be nerfed in the set, this will be the one.

There are a few other cards that I didn’t mention here that are pretty good that haven’t made much impact on the meta yet, or that are probably just bad. There is still lots of room to build new decks, and I’m excited to see where things go from here.

Now let’s take a look at some of the new decks that are popping up on ladder lately.

The name I have assigned to this archetype only scratches the surface of what this deck is doing. Take a look at the decklist:

As with most Knifebloom decks, there are some odd inclusions here, that probably just work super well. Not a ton of interaction but sometimes you can just slap a Bayonnet on Hojan and ramp into Palace on turn four, which is absolutely insane. Knifebloom even mentioned that the deck needs some tuning, but I love this idea a lot and will definitely give this a few go arounds.

Ixtun was definitely very close to being viable when defiance released, and I think I can safely say that it got the boost it needed to be tier one. Vargo Redclaw is very good, especially in conjunction with Korovyat Palace, which makes Redclaw nigh indestructible after getting an Aegis. I think that I want more sweepers in this particular list, perhaps one or two End of The Story main or maybe just one in the Market. I also love that this deck is almost all four-ofs, maximizing consistency.

This is another cool deck made possible with a couple of new campaign cards as well as a few additions from set 5. This is another archetype that has always been very close to good, but has never quite gotten there. Ponysnatcher is very good in this meta, and Desecrate is insane. I definitely want to see some Dark Returns in this list, but this is a really good starting point.

I have seen a few different iterations of this combo, but this particular decklist seems pretty solid. The idea is to play either Severin, the Mad Mage or Great Valley Smuggler (Fetching Infinite hourglass) and then to activate Governor Sahin, sacrificing a relic, and cheating out Martyr’s Chains very early. This is obviously very powerful when it works, but it doesn’t always go smoothly. I appreciate the above list because it allows you to play aggressively in the early game with Teacher of Humility and Amaran Stinger, while still being able to do some unfair things.

Disclaimer: this deck is probably not actually good, but It can do some pretty powerful things. Demand Death lets you play a potentially fatty charge unit while Divining Rod can then spew more units off the top of our deck. It’s a cool idea, but I don’t think that it will break the formats by any means.

From the moment that Diogo was spoiled, people started to brew with him, and a couple of sweet decks came about:

This deck is probably trash, but it’s very fun to watch it go off:

This deck is a little more straight forward:

I played against an FTP Diogo Moment deck a couple of times over the last few days, and the more I see it, the more I want to build and tune it. It’s a little awkward not being able to control which spell Diogo hits, but I love the idea of being able to play two giant sentinels for free.

As for the Invoke The Waystones deck, I’m sure that there’s a way to make it competitive, I’m just not sure what it is. Every time I go off with the combo, I either mill myself and look really dumb or I kill my opponent with a giant Temple Artisan with Savagery. Either way, it’s a cool deck even if it’s bad.

That’s all for me today folks. I hope we continue to get sweet new archetypes in the coming weeks, and I hope that you find a brew that fits your play style!

Anything you’d like me to write about? Shoot me an email at [email protected] or hit me up on Twitter!

Thanks and have a great week!

Make sure to follow us on our socials and check out our sponsors: https://linktr.ee/teamrankstar