The following is a guest article by RousseausDisciple.

Greetings, fellow players of Eternal! I am RousseausDisciple, and today I would like to talk about power bases and deck speed in the game. To begin, I have a question for you: have you ever played a power on autopilot, only to kick yourself seconds later because it prevented you from making a play you just drew, or that could have been played next turn? I know I have (and still do, frequently, for that matter). However, I also know that with better deck construction and more intentional play, I can reduce the number of times this happens to me. Hopefully, if you are reading this article, you can too.

The first aspect of deck construction that can make a significant difference in play is keeping in mind how much of your Power base is depleted. This is not to recommend you do not play depleted Power, far from it. Dire Wolf designs depleted Power with upsides for a reason. For some, that reason is as simple as providing multiple influence. The Monument cycle set a different standard, though, and Standards and the Coins from Dark Frontier all show just how valuable a depleted Power can be. The most ubiquitous depleted Powers are, of course, Crests, and for good reason. Crests fix influence, make it more likely you hit your next Power drop when you need it, and make it less likely you draw Power when you don’t.

Every deck still plays some Power that is not depleted. Seats and Banners are relatively ubiquitous in both ladder and tournament decks. Waystones are crucial to several strategies. Sigils, as simple as they are, see a significant amount of play because they enable so many other cards. One such card is Seek Power. Seek Power has been a staple of good Eternal deckbuilding since day 1 due to its ability to find you whichever color you happen to be missing, allowing you to play the minimum number of total Power, and in combination with the opening hand algorithm, still expect to hit the first few Power reliably. This is one concrete recommendation: if you are not playing Seek Power, or the appropriate Cargo for your deck if available, try it. You are unlikely to regret it.

The last consideration I would like to give to all power bases equally is dependency. Many Power ask your deck to do something specific so that they will not be depleted. Seats, of course, ask you to play a sufficient number of Sigils (and Seek Power counts!). Banners want you to have not only a sufficient number of Units, but also a sufficient number of Units at specific costs. Your double two drop, double Banner hand is not going to be as fast as you might want. To that end, consider which points on your curve absolutely need Power to be undepleted. Are you playing Skycrag with 12-16 1-cost cards, and need live Power on turn 1? How about your Merchants? Do you need to play your Merchant on 3 or can it wait until 4, probably along with another depleted Power? Does your deck need to play Harsh Rule on turn 5 in order to survive? Each of these considerations asks something different of your Power base. So, let’s discuss that.

Different decks have different needs. Fast decks want to play as few Power as possible, while still hitting the first 3-4 Power drops. Slower decks want to hit Power drops forever. They usually need to gain a lot of influence, and if they can get “value” along the way, so much the better. These differing game plans and differing needs imply different Power bases.

Fast decks are often aggressive. Aggro relies on curving out, often with multiple 1-drops, and needs consistent undepleted Power to do that. Banners are well suited for this, as aggro often has the Units (cheap Units!) they depend on and make the best draws better. 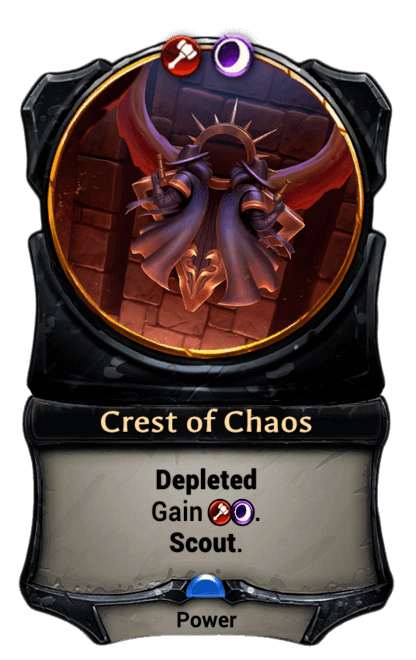 They will usually play Waystones, and often no more than 4 Crests. Combo is a different archetype that can be fast; Scream Tempo comes to mind. Such decks will have similar power bases to aggressive decks, though sometimes with Seats and Sigils over Waystones or a few extra Crests to help find pieces.

Slower decks (usually control) tend to play 6-, 7-, 8-cost cards and need to hit their Power even late into the game. They often have situational cards, which can be searched for or sent away by Crests depending on the scenario. A slow deck may play Seats or Banners depending on whether they play cheap, defensive Units (Chalice) or interactive Spells (Removal Pile). Waystones are much less ubiquitous here, as the Seat/ Sigil/ Seek package takes a lot of slots. That package is often included in control decks because it is a way to play Power undepleted for Hailstorm or Harsh Rule without committing resources to the board, which would make those cards less effective.

Some decks are not cleanly fast or slow. Combrei Chains plays a lot of cheap Units, but it is not really looking to attack early or end the game quickly. Stirring Sands decks have early plays and are trying to do something game-ending around turn 5, but their deck is full of 9- and 16-cost Sentinels. What do these decks prioritize? Well, almost all decks that aren’t cleanly aggressive play 8-12 Crests because Scout is so good. As mentioned earlier, it smooths out your curve by helping you find Power early and Spells late. Outside of that one constant, the rest of your Power base depends on your particular deck. Banners, Seats, Sigils, Waystones, and Transmute Power are all deck-dependent. But Rousseau, how do I know which to include?

To answer that question, we should talk about curve topping. Different decks have different power curves (things they expect to do at each point of power). Aggro wants to play a 1-cost thing on 1, a 2 on 2, a 3 on three, 2 2s on 4, and then basically gives up if it hasn’t won. Control basically asks “Am I dead?” for three turns, plays a Hailstorm or Harsh Rule, and if it still isn’t dead, plays whichever BIG THING™ it is named for.

Midrange decks like Armory and Big Combrei have a curve that looks something like Crest, removal, thing, bigger thing, and then sometimes a BIG THING™.

Each of these decks has some way to mitigate the effect of flooding, or drawing too many Power. Aggro prioritizes hitting the first couple Power drops, but afterwards would rather draw even a crappy non-Power card. Hence, Waystones, Standards, and sometimes even Monuments make appearances in these decks. However, because their curve is so important to them, the numbers on those cards are limited. Control, on the other hand, prioritizes continuing to hit Power late. It almost never plays Transmute cards, and it maximizes Crests both to help it hit Power 8 and prevent it from hitting Power 13. They also mitigate flood by playing card draw and/or expensive cards. Midrange, as usual, straddles the line between these two extremes. Occasionally a Transmute card is good enough; Dawnwalker decks will often play a couple Amber Monument.

Build and play your deck with the top of your curve in mind. Include Transmuters only if you want to stop making power drops after ~6. You will still draw your Sigils, Waystones, etc. but your Power density drops significantly after 5 if you play Standards. If your deck goes REALLY big, consider playing more than the traditional 25/26 Power. Some Channel the Tempest decks back in the day played 29 Power PLUS 4 Seek Power. They were not kidding around.

One last thing to keep in mind: if you have Transmuters in your deck, play like they are part of your Power base until they are not. I know that sounds obvious, but some people really want to get “value” out of their Standard and will not play it as a Power until they have to. A hand that is low on Power count (or high on curve for your deck) will really want to consider playing its Transmute card as early as possible, on a turn where it will spend the rest of its Power. The tempo cost of missing a Power drop and its associated curve play is higher than playing a depleted Power in almost every scenario.

This is a lot of words to say, in essence, pay attention to your Power base. Think about how much depleted Power your deck can afford to play. If you consistently cannot play cards on the turn you want to play them because your Power is all depleted, add some Sigils! If you constantly draw too much Power, see if there is room for an extra Transmute card, or Coin, or Waystone. When playing a game, spend some time on turns 1 and 2 thinking about when you need undepleted Power. Is it right now, to get on board? Or, do I need to make sure I have this Sigil available on turn 5 for Harsh Rule? Whichever it is, most hands can guarantee a curve play on any one particular turn, but you will have to plan for it. Hopefully, with a bit more thought during deck construction and a bit more forethought during play, we all can kick ourselves a little bit less.

Best wishes to you all,

PrevPreviousEternal and Archetypes
NextA Closer Look at the Features of MythgardNext